Yuvraj Singh and Mahendra Singh Dhoni are two people who have gone down in history as absolute legends. Their contributions in cricket are extraordinary as they played memorable roles in the 2007 T20 World Cup and the 2011 World Cup. These players have paired up when the team needed them the most, which is what makes them so amazing for India and Indians all over the world. Holding partnerships is not easy, to say the least. Both the players need to give their undivided attention to the game, but at the same time, they also need to keep track of the movements and body language of the other person on the opposite side of the crease. They need to have a good rapport among themselves so that they can work with each other with full efficiency. Here are some of the most memorable partnerships from the iconic finisher duo.

India was at 91 for 5 when Yuvraj and Dhoni took the crease in the Videocon Triangular Series to chase down 251 runs. The team was crumbling and in need of a desperate partnership. The duo added 158 runs to the scoreboard securing a milestone win for their partnership. This was especially hailed, as this was just their fourth Test together.

Team India under Rahul Dravid had already sealed the series with their wins. However, this was an especially important game for Pakistan, as General Parvez Musharraf, former Prime Minister of Pakistan, was present at the Karachi International Stadium to witness the match. The game started off pretty well for India, and the score was 141 for 2 when MS Dhoni stepped into the crease. The target that Pakistan had set was 287 runs, which was a winning total back then. However, the Yuvraj-Dhoni partnership added an unbeaten 146 runs to secure the win. The match ended with Yuvraj scoring 107 runs in 93 balls and MS Dhoni scoring 77 off just 56 balls.

India won their first match in the five-match series against Australia against their arch-nemesis Pakistan by five wickets with three overs remaining back in 2007. The score was 113 for 3 when MS Dhoni stepped in, knocking an unbeaten 63 runs, while Yuvraj on the other end got out for 58, adding a 105 total in their partnership, hence winning the game. 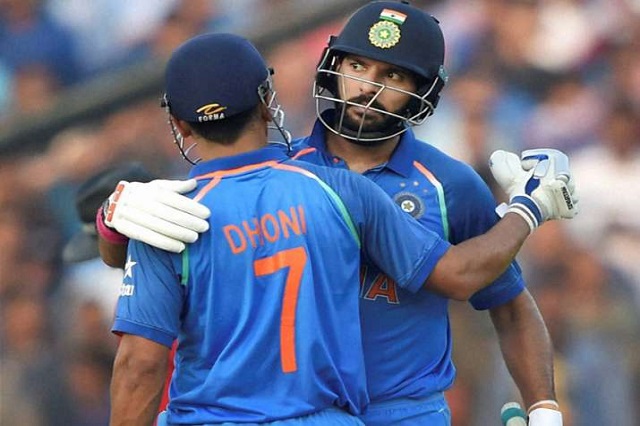 In the third ODI match in the seven-match series against Australia, India was at 37 for no loss but quickly dropped to 53 with three down, losing crucial players. At this stage, Mahendra Singh Dhoni stepped onto the crease and delivered a partnership with Yuvraj scoring 148 runs, securing the win for India. Yuvraj Singh scored 78 runs while MS Dhoni scored 71.